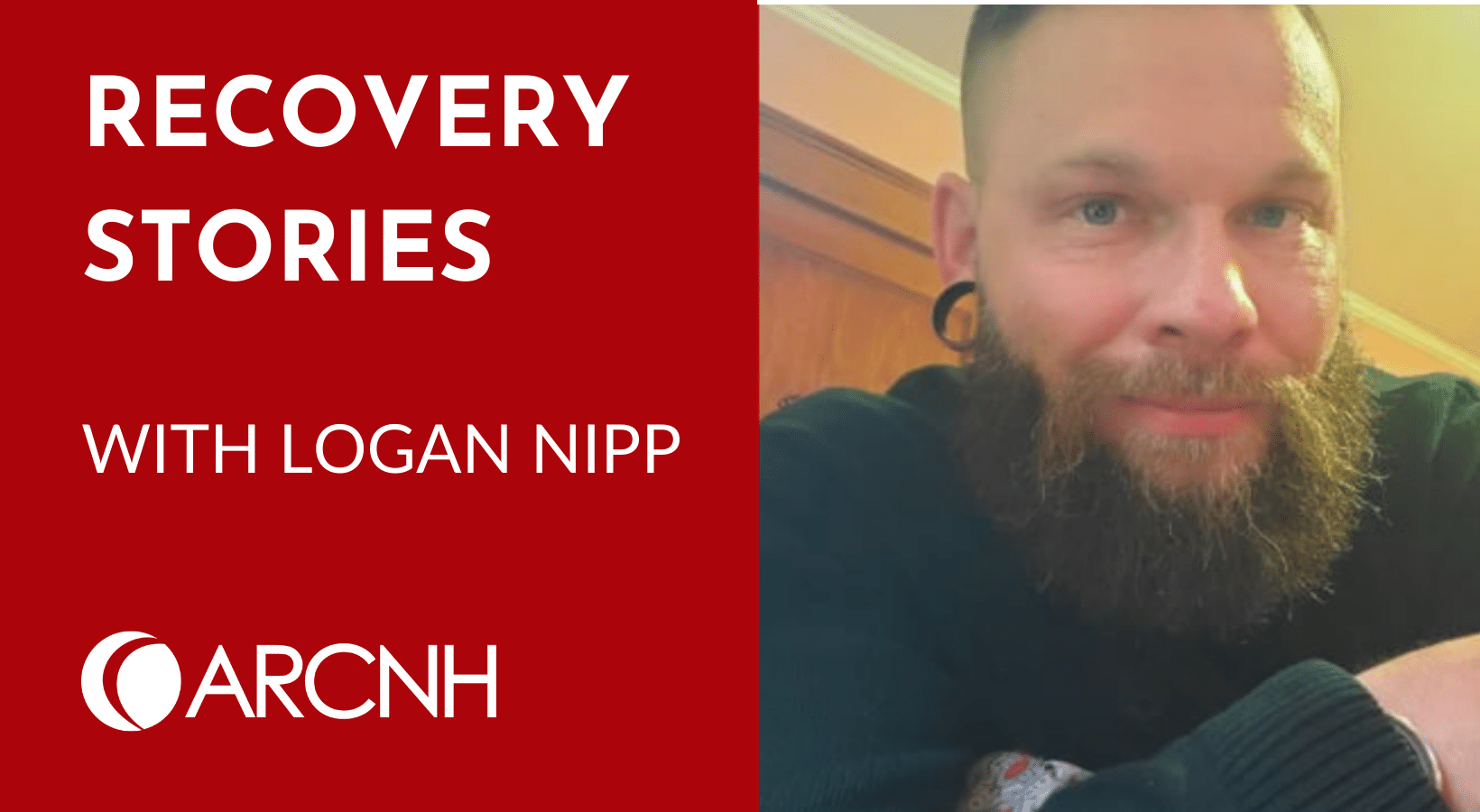 I’ve been working to develop the ARCNH blog into a stream of regular, dependable content for a little while now. One of the ideas I was most excited about was talking to people in recovery and getting their stories out into the world. I tried so hard to find people to work with me. Weeks went by. No bites. Then my coworker got the memo that I was looking for help and he sent out the word. Facebook messages came flooding in.

Among the first messages I received was from Logan Nipp. Within minutes we had a plan for him to come meet me at the ARCNH center in Milford (more than an hour away from him) on a Monday afternoon because he had a few free minutes after he helped out a sponsee.

Logan showed up 20 minutes early and was just absolutely cheerful. I don’t know how he got there 20 minutes early because later he informed me that on the way there he had stopped at a gas station and was interrupted in his get-to-the-bathroom-mission by a person in need of a jump start. Logan had jumper cables and helped  him out. After the person’s car was running again he went back to his mission, and don’t worry, no bladders exploded, it was close though.

Back at the center we headed into an office and started our conversation. Logan told me that my coworker had first reached out to him about this interview, he had actually been going through a bit of a low. A few weeks ago he had tested positive for  COVID-19 and had to isolate from his family for a bit. Spending time with his family, he told me, was important for him to maintain his recovery and his mental health. “What does a low look like for you?” I asked him, “it’s mostly a lot of self pity, a lot of ‘why me?’ and ‘it’s not fair’, all that self-centered and selfish kind of thinking” he said, “and how do you get out of a low?”, “I drag myself back to meetings.” He told me that when he’s taking best care of himself he’s going to a meeting just about every day.

Everyone’s recovery looks different and not everyone finds regular meeting attendance helpful but for Logan it’s important to be surrounded by that support system.

When I asked Logan about his life today he said “I’m a basic bitch honestly; I mean, I get up, I go to work, I come home and hang out with my family and then do it all again the next day” at least that’s how he describes it. Logan spends a lot of time giving back. He’s a sponsor to several individuals, a role which he said is usually quite rewarding. Additionally, Logans’ past life, like the lives of all people in recovery, was full of difficulty, and struggle, and Substance Use Disorder.

Logan grew up with Substance Use Disorder on both sides of his family. When Logan was 20 he got his first underage DUI; his struggle with Substance Use Disorder started early. But, at that point he didn’t see his alcohol and drug use as a problem. So the incident and aftermath of the DUI didn’t set him on the road to recovery but, he said, it planted the seed of the potential of AA as a path to healing so when he was ready for recovery, he knew where to go. Logan continued using; at one point in our conversation he said “my only path to happiness at the time was through a needle or a pipe, those were the only tools I knew”. I asked him how he decided it was time to try to recover. He told me that he realized he didn’t want to die and if he kept going this way he was going to. Life in active use was dark and he was depressed and suicidal a lot of the time and he got to a point where it was time to try something different, even if it was going to be incredibly hard. And it was incredibly hard.

Logan has been in recovery now since the 28th of December, 2018 and this is his third go at it. He told me the first two times didn’t work because he didn’t want it enough. He said “you can recover but only if you really want it, it’s just not going to work until you really really want it”. I asked him what recovery meant to him and he simply said “happiness”.

“I didn’t know happiness like this could exist. I didn’t know there was beauty everywhere and now I see it in everything, everyday, in the way the leaves move, in helping a stranger jumpstart their car, in everything.”

It’s easy to lose track of that feeling, it’s easy to miss those everyday moments of happiness, joy and beauty but Logan reminded me in a powerful way to be grateful and to notice.

I wanted to learn more about Logans’ path to recovery, because for everyone it looks different. He told me that when he was finally ready to seek recovery he took the path of AA membership. So I asked him about how the 12 steps worked in his life. He said; “everyone says step 4 is the one where you really start changing but for me it was step 9 – making amends. I was a heinous drug and alcohol user and I did some really bad stuff. People were changing locks and codes to keep me out but now I’m a person with the keys and the codes and I’m invited to stop over whenever. People have accepted my amends fully and welcomed me back. They didn’t ask for a dime back, they just forgave and accepted me.” For many people, like Logan, recovery isn’t a one and done type thing it takes work every single day. Logan still reviews his actions and past and works to grow as a person every day. He told me that a big part of maintaining his recovery is giving back. He has several sponsees now and he works with them to help spread the joy he has found in recovery. He told me they aren’t always cooperative, sometimes they don’t call or check in but he also told me that once in a while he gets to help someone find that joy he found. He watches recovery just click for them and they find “this new life and they find happiness” and that is really rewarding.

Logan’s left arm is well on its way to being sleeved with vibrant and unique tattoos. I asked him what they meant. He told me his tattoos are in memory of a good friend of his that died by suicide when Logan was 3 weeks clean. He told me “I didn’t have to drink or drug because I had surrounded myself with the right people and I was in the right place and they helped me get through it”. The conversation about Logan’s tattoo led us into some deep introspection. Logan said, “I never noticed when I was using, maybe because I was too self involved, all the people dying around me. Now that I’m not using and I’m trying to help people, it happens all the time. It’s so hard to walk over the bodies of your friends. I don’t know how I didn’t notice it before, it seems like it’s so much worse now but I guess all I could think about back then was the meth pipe or the needle.” “There have been a lot of losses for me in the last 3 years.”

As my heart crept into my throat at the thought of Logan losing so many I asked him how he got through those losses. His answer was simple and beautiful. “I keep in touch with my Higher Power, and I call people.” “One thing I’ve learned, you can’t just call 1 or 2 or 3 people, you have to keep calling, even if nobody picks up until the 35th phone call, you have to keep calling. Because people not picking up doesn’t mean they don’t care, it doesn’t mean you’re worthless, so you just have to keep calling.” What does your higher power look like? I asked “I don’t even know.” he said, “I really don’t. He’s just everything. And I don’t get down on my knees and pray everyday I just talk to him when I’m in the car or alone or just need to.”

Knowing all that I wondered if Logan would change things so I asked ‘what would you say to your younger self?’ He thought for quite a while. A couple of times he almost gave a message he would give his younger self but finally he landed on “Probably nothing.” He explained “all of that stuff sucked but you can’t find recovery until you’re ready for it and I think I’m a good person now. I mean I still have a long way to go but I had to go through all that to get where I am so, I don’t think I would say anything to him.”

Logan says he really wants his recovery to last. He recently started a new career in HVAC which got him out of the kitchen where he was working as a chef, a setting which he felt contributed to more than one of his returns to use, and he’s really enjoying it.  He has ambitious goals. He told me; “I really want to open recovery residences there just aren’t enough of them in the Concord area. Everyone says I’m crazy and I know it’s a huge goal but I didn’t recover to make money and I want to help people. I want to help dads who want to get their lives back on track.”

I wanted to close with two answers from Logan that I found deeply inspiring:

What would you say to someone in early recovery?

“This is going to be really hard, but you more than deserve the gifts that come with recovery.”

If you are in need of SUD or recovery services and are unsure of where to go in the Manchester Area just walk into any Fire Station in the City and through the Safe Station program  you’ll be able to find the help you need.

If you are considering suicide please know you matter and the help you need is there. Call the National Suicide Prevention Line at 800-273-8255 to get support today.

Finally, Logan invites anyone in need to reach out to him, call us at ARCNH and we’ll connect you.

If you or someone you know is in need of recovery services please reach out to us.